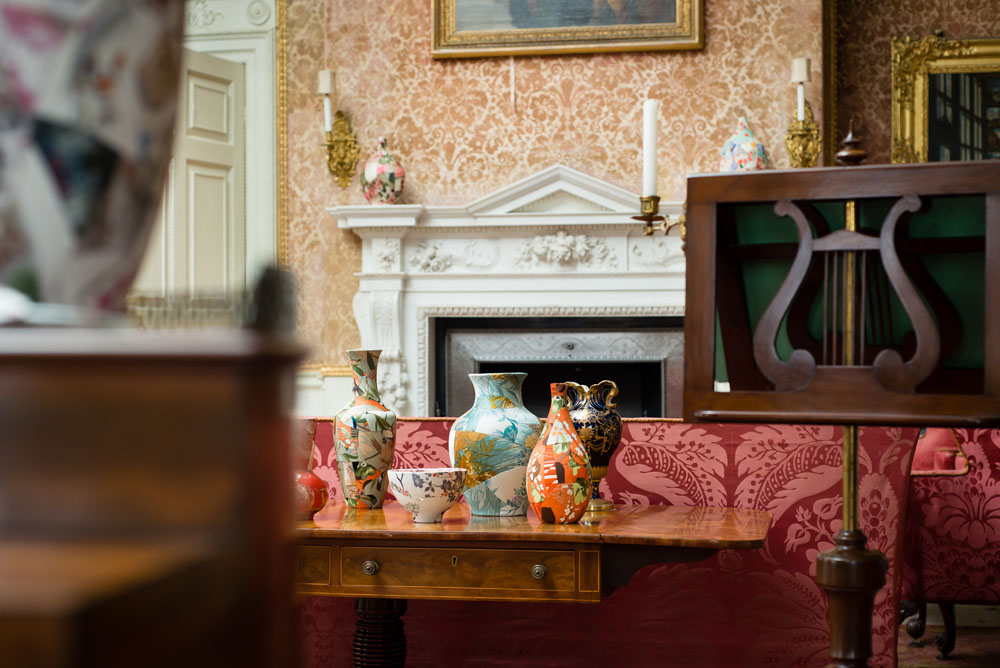 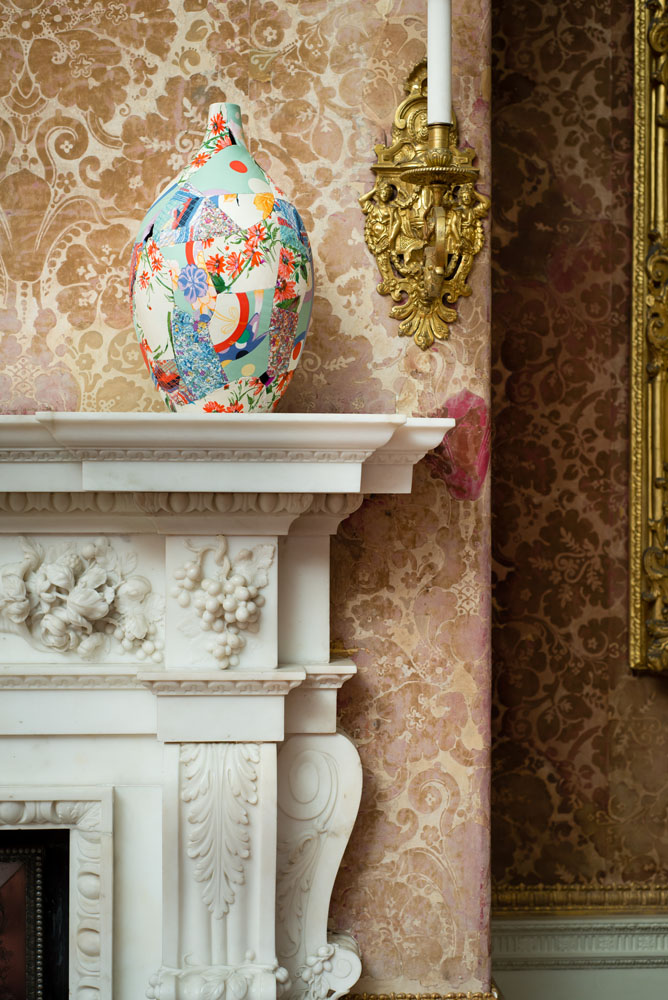 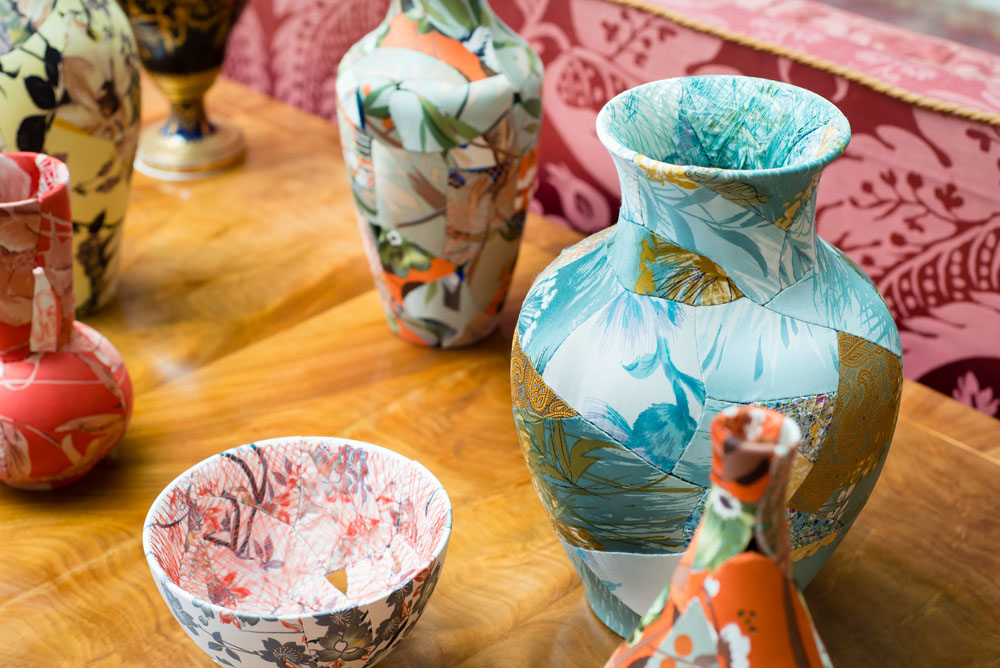 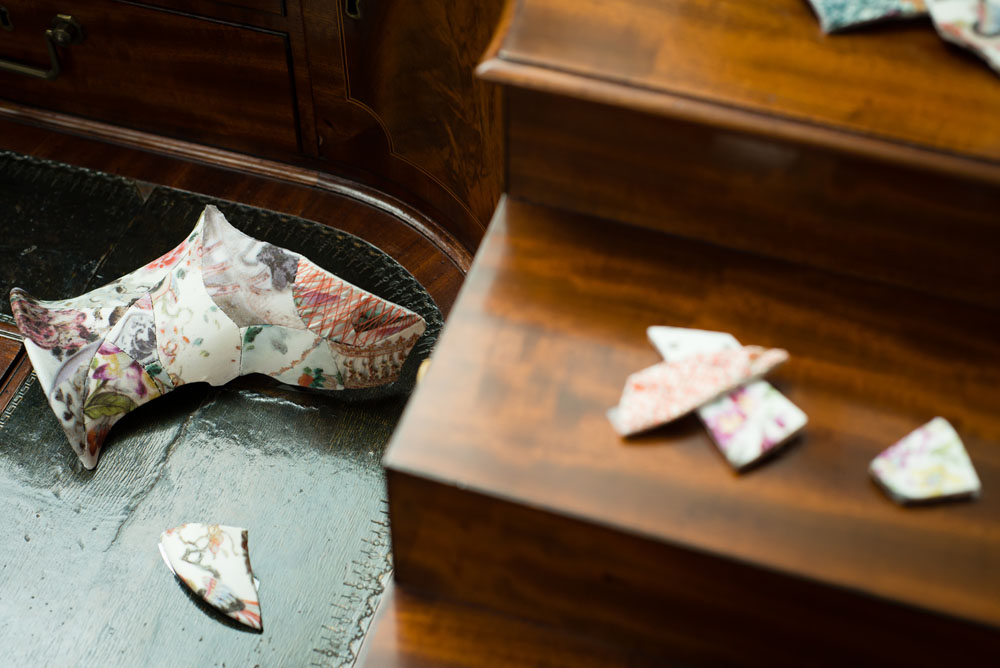 In 1989, Uppark was devastated when a fire, which started on the roof, ended up gutting much of the house. As the fire burnt downwards, a desperate race began to remove artifacts, paintings, textiles and furniture from below. Chains of people passed precious items out onto the lawns. Eventually ceilings and fireplaces caved in, plasterwork and remaining items were smashed and all ground floor rooms were left exposed to the sky.

In the aftermath, the four feet of damp ash and debris which lay in the rooms was gathered and stored in regiments of black dustbins out on the lawn, waiting for their contents to be carefully sorted. After some debate, the decision was made to restore Uppark to ‘the day before the fire’. What then emerged was a vibrant community of skilled craftspeople, taking up residence
in makeshift workshops and offices in the grounds of the property. Old skills were rekindled and expertise shared. Salvaged fragments were grafted onto replacement sections. Tides of people came and went and slowly Uppark was rebuilt. From the traumatic event came an amazing opportunity for discovery and innovation and the collective energy of the endeavour left its mark on everyone involved. My ceramic patchwork pieces celebrate the painstaking dedication of this remarkable temporary community.

Playing on the aesthetics associated with archaeological restoration and traditions of Japanese ceramic mending, the hand- stitched pieces revive materials, embrace flaws and celebrate the outcome of misadventure. They sit in the Red Drawing Room as ‘replacements’, alongside ‘fire survivors’ and substitute ceramics. Their hand-stitched construction echoes the pioneering textile renovation work undertaken by Margaret Meade-Fetherstonhaugh to reinforce Uppark’s 18th century curtains, a task that later enabled them to withstand being wrenched from the windows.

Because I am interested in the journeys objects make, all the ceramics I re- work are second-hand finds, making for an interesting play between Grand Tour treasures and revived mass-produced reproductions. The fabrics are a mixture of old and new, either gathered on my own Grand Tour of charity shops and vintage sales, or digitally printed with repurposed classical and oriental imagery.

There remains a room, stacked high with bread trays, containing smoky fragments of an array of beautiful ceramics found within the ash after the fire. Photography, digital fabric printing and hand-stitched construction enable these fragments to once again take on three-dimensional form and return to sit, if still incomplete, within the elegance of the Red Drawing Room.