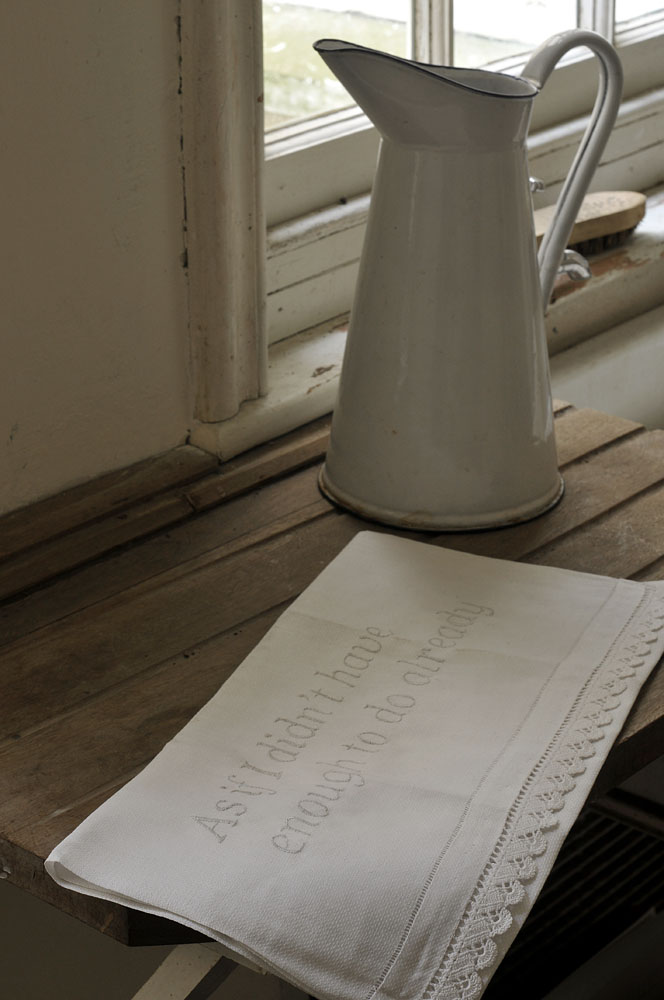 In the embroidered works made for Unravelling Nymans I have worked on  existing textiles, in some cases undoing work embroidered on them. The  works thus created become conversations, with the site, within the object,  and with myself; intervening in and altering another person’s work is not  undertaken lightly.

I Don’t Want To Lose You is about the pseudomedievalist  plaque above the chair on which the  cushion sits. A knight says goodbye to a lady  before going off to fight, just as Leonard Messel  would have said goodbye to his family before  going to serve in the First World War; the words  reference a contemporary song, Your King and  Country Want You, from 1914. In embroidery, the  name of the maker – usually a woman – tends  to be lost; similarly, it was Muriel Messel, not  Leonard, who lost her life during the war.

The involvement of the housekeeping staff in the embroidery guild set up  by Maud Messel is referenced in As If, the white on white (stitch on linen)  reflecting the invisibility of the competent running of a large household.  Culture, in the Library, considers the relationship between inside and  outside. Plants from the exterior world become the materials used to  create the fabric of the building and the objects within it, as well as being  the subjects of study, guarded behind glass in the bookcase. The plants’  scientific names are sewn onto an anti-macassar, designed to protect the  cloth fabric of the chair from human contact.

The time-consuming nature of hand embroidery, especially embroidered text  in a world of instantaneous digital text production, is an enabling anomaly.  Taking an hour over each letter is a luxury of slowness allowing time for the  consideration of the potential for multilayered approaches to the text-objectsite  relationship. The texts refer to the business of making art, justifying it,  and the relationship between artist and work, one of skill, learning, intimacy  and parallel growth followed by loss and distance.